So Cape Town has quite a number of people worth turning our short attention spans to. This is the first cool person I’ve been fortunate to profile, and I’m really excited about the various projects he has going. But apart from the projects, it’s his persona, too, which has people lining up to join his team.

When Jongi Kanko, the person behind Grassroots Youth, shakes your hand, one feels not a little like you’ve just had a close encounter with Bruce Wayne. And then he sort of beams at you & gives you his time and, even though you know he has very little of it, you take it because getting beamed at by him is nicer than watching him beam at somebody else instead of you.

A retired boxer, Jongi experienced an injury that almost cost him his legs & stopped his successful boxing career. He turned to coaching & then focussed his attention on community upliftment – most notably, in his local community of Makhaza in Khayelitsha, Cape Town.

The community – varied, exciting, & uniquely Capetonian, is also plagued by crime & drugs as so many of our suburbs are. So Jongi spent his time, when not coaching ‘white collar’ boxing in the city, in setting up a boxing gym (Grassroots Academy) in his own neighbourhood for potentially ‘at-risk’ youth. Working with some of his friends & clients from other communities, the gym has grown & supports a number of talented young boxers – some of whom compete professionally.

Jongi casually told us the story, one day, of nearly having to have his leg amputated. I was in a near-faint (smooth, Tj, smooth) & he was recounting how grateful he was that he didn’t listen to the first doctor he visited. Or else he’d have lost the leg! He seems to enjoy telling stories, but what’s curious is that he doesn’t really have a soap-box from which he tries to educate the rest of us about What Really Matters or How To Be a Better Person. He just kind of IS a good person & the rest of us want to be more like him as a result.

After some time, he added the education & nutrition arms to the programme (and so, Grassroots Youth was born), which opened Grassroots to more local children of all ages, and offer opportunities for grown-ups like us to get involved as well.

What does it involve?
Kids attend ‘class’ between 12pm & 2pm on a Saturday & are provided with homework assistance by volunteers who specialise in various fields. It’s still in its infancy phase to some extent, but the effect seems to be great all-around. The kids are enjoying the reading groups (mostly for the little ones) and the homework help (primary & high school youth), while the volunteers are brushing up on their high-school knowledge & spending their Saturdays in a pretty fun & rewarding way.

The kids also have lunch at the centre & if there’s time, there will be various games going on for those who finish early. My favourite part is the fitness session, where we’re all hauled outdoors to jump up and down at Jongi’s command. Mostly we groan, but we’re always energised after. Being coached by a known champion is an honour worth sweating for! 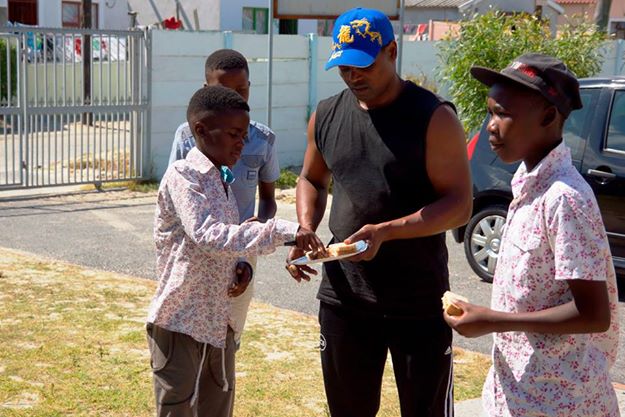 I have to say, since I started signing up my free Saturdays with this programme, I’ve been looking forward to my Saturday mornings a lot more than usual. I’m not quite sure what it is – perhaps the combination of really polite but curious & energetic children, meeting new people my age, getting to chat with Jongi & learn about his interesting life, the pretty drive out to Makhaza, I don’t know. Many reasons.

All this has come from Jongi’s vision, his charisma & his perseverance in getting this programme set up. He’s assisted by some amazing people who helped set up the programme as well (more on them later in upcoming Profiles), so the programme isn’t short of talent & good guys (but there is always a call for more weekly tutors). It IS short of space, though, as it’s currently being run out of a small health centre not designed for housing tons of kids of all ages. Jongi mentioned that they’re trying to sort the space out, but they’ve had major hurdles so far.

It seems I’ve ended up talking more about Jongi’s projects than, well, him. Which is funny, because that’s a little bit of what happened when I interviewed him. He smiled & told me a bit about himself, and then talked about the things he loved, of which improving the general happiness of the world around him featured heavily. He counters the intimidation which his boxer’s frame may inspire with a warm smile, a firm handshake & incredible patience shown toward even the most restless toddler (or tutor!).

If you have the opportunity to join one of his projects or just to meet him in person, you’ll be doing yourself a favour by taking it. You’ll feel as though you can conquer the world afterward! Even if you are only half his size & with muscles made of dough.
The kids being coached by Jongi & his team also seem to have been affected by this growing sense of empowerment, as I have. And that, I feel, shows what an incredible impact one cool person can have!